This outbreak of COVID-19 is putting humanity to the test. We’re all focused on it, however much we try not to. This morning buildings in Zagreb crumbled after an 5.3 Richter scale earthquake in Croatia. Those buildings looked like they had stood the test of time until now. 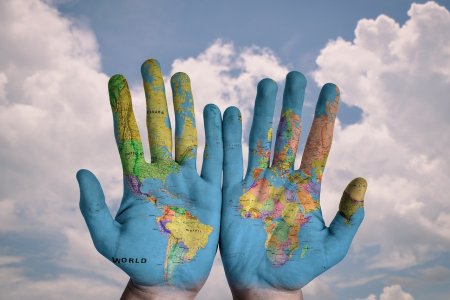 While the pandemic sweeps around the world, humanity has to get its priorities straight – Image by stokpic from Pixabay

The pandemic has stopped humanity in its tracks. City streets are deserted and even politicians are reaching for experts to guide us. The world is talking and ordinary people’s voices are being heard. Creativity and resilience are increasing and people are caring for vulnerable citizens like never before. Governments and companies have to be accountable and key workers are being valued over sports stars. Rich people are not immune. Everyone is in this together. We have to get our priorities straight right now and maybe for good.

People are seeing the downside of Trump and conservative politics are being pushed aside in favour of a more socialist approach. In mainland Europe, the French, Spanish, German and Italian governments are pulling together and putting public health first. Boris Johnson has followed suit.

Trump has been ridiculed for calling this a “Chinese” disease and is making it all about him. Did he reduce funding for to the CDC? He has now ensured they have the resources to continue fighting the outbreak. The Hill article gives more info.

This is my list of silver linings, past, present and possible that I think are emerging.

No wars are being fought. Troops have gone home.

There are no wars being fought right now as everyone fights the nCov. Perhaps because of our negativity bias, no one is talking about this. If I’m wrong, please shout.

Everyone is in this together – the greatest equaliser

With much loved celebrities Idris Elba, Tom Hanks and Rita Wilson testing positive for COVID-19, no one thinks they are immune and knows money is no protection against this virus. Everyone is equal to COVID-19, although they will respond according to their health.

Retired doctors and nurses are returning to the NHS

The NHS was almost on its knees after Brexit, with workers from Europe or the Windrush generation sent back home and doctors targeted for tax being forced into early retirement before exceeding their personal pension tax allowance. Also GPs leaving for 24 hour GP websites such as Babylon Health that was sucking up lots of NHS trained doctors. Now a Google search puts sponsored advertising for Babylon right at the bottom of the page under the NHS.

Socialism is proving to work better in a crisis than Capitalism

With the Dow Jones Index falling through the floor, speculating on the stock exchange has stopped. The international community over social media is turning on companies such as Wetherspoons and Waterstones that want to stay open and not sufficiently protect their staff or customers.

Governments are having to provide people with sufficient resources to survive this.

After a decade of devastation to the lives of disabled, poor, isolated, old and unwell people in the United Kingdom, with the DWP responsible for a growing death toll, recently Erroll Graham, who starved to death in his flat, the government is having to treat everyone the same and provide council tax, housing benefit, self-employment, universal credit to everyone that needs it with less red tape. The Citizen’s Advice on what is needed.

Racism is being shown up as ignorance

Since Donald Trump called COVID-19 a “Chinese Disease’ Asian people have faced racism. Just to be clear, this was always about the wild food markets that had previously been to supply poor people who could not afford conventional lives stock and were suddenly in demand to export wild meats to meet the demands of people paying for over the odds to eat in wild food restaurants. Now the wild markets are closing. Entitlement is no protection from COVID-19.

Demand for fresh produce and real food has increased, with many non-essential foods left on the shelf. Despite initial signs, the voices of the best scientists are being heard again and people are showing their preference for read food over junk food or processed food. Looking at what is selling out in the supermarkets, meat, eggs and greens as well as tinned fruit and vegetables, cereals, beans, legumes and traditional items such as bread are flying off the shelves.

With most people having three months not working in this day of technological opportunity, people are getting creative. While people are at home, and many are not allowed out, artists, comedians and musicians have got more audience than ever before. Live gigs are being performed online, topical videos and comedy being shared, while artists and writers get a chance to create 12 weeks of new work without the 9 to 5 or without the distractions of job hunting, visits to job centres or hassle from the government with increased benefit support.

Companies are being forced to be flexible and let people work from home.

A big one – with flights all grounded, mining and industry slowed right down – EARTH IS GETTING A BREAK.

With increased extreme weather, named storms and today’s earthquake in Croatia, nature and the earth have been showing signs of strain. Warnings of a climate crisis by Greta Thunberg and other climate experts has been ignored and Trump withdrew America from the Paris Agreement. Arrogance and ignorance were winning the climate change battle but the COVID-19 outbreak has forced it all to stop. Earth now gets 3 months at least all around the world to recover its health and the ongoing benefits might be felt for time to come.

Human creativity, empathy, compassion and emotional intelligence are all being celebrated

Selfishness has never been rewarded in evolution and domineering people have been shunned in various societies. Right now, compassion, empathy and selflessness are being celebrated.

We are valuing key workers over CEOs and football players right now.

Sports matches have stopped and companies have had to protect their staff. Those that are slow off the mark are being shunned on social media. Right now, the most important people are cleaners, scientists, carers, doctors, nurses, teachers and journalists. The will of the people has overcome the will of the corporation.

Tax dodgers are getting their comeuppance

With the world talking over social media, companies that have not paid their way in tax are going to come under scrutiny as the economy depends on their taxes and they cannot up sticks and move to hold us all ransom.

Real work is taking over from fluctuating on the stock exchange.

After the devastation to people’s lives caused by Wall Street, when it fluctuated wheat on the stock exchange without a single thought for people in the Middle East whose livelihoods depend on such products, the Dow Jones gong through the floor. This sends out a clear message that the stock exchange is not an essential form of industry and we don’t need it right now.

Gallows humour is back

Political correctness is taking a backseat as people get creative in quarantined conditions and with curfews. If it’s funny it goes. COVID-19 has become the focus of everyone around the world and anything funny to say about it to relieve the stress seems to be being said, with a massive reminder of how innovative and imaginative many human beings are.

Let’s Look at the Good Side of the World right now.

Despite the obvious tragedies that have been going on, it seems that humanity is getting its priorities straightened out right now. We are valuing key workers and people doing essential jobs over mere fluctuation. Real world results are rising up. Creativity, imagination and humour are being shared. The world is getting in communication, information is being shared. Fighting has stopped. Stealing other nation’s resources is not increasing. Bad politicians and companies are going down. The people have spoken and have to be heard. People are being cared for and everyone is getting the chance to be creative and resilient at home and try new things.

Selfishness, greed and bigotry have no place at the moment. Earth is getting a break and the climate will benefit, whatever people think about it.