The Conservative MP for Stratford Upon Avon is interesting for all the wrong reasons. is this someone we want in government? Who’s interests does he represent? In January, Theresa May gave him a post as  Families and Childrens’ Minister. Wealthy Conservative party donor David Meller has resigned from the apprenticeship delivery board that he co-chaired with Nadhim Zahawi, who voted, in 2012, against introducing a tax on bank bonuses to fund creating new jobs for young people, reducing VAT and tax for firms taking on extra workers.

I find it staggering that people such as Zahawi and Meller are put in ministerial posts that represent the groups of people who their voting records show they have least concerns about: particularly young people and families on low incomes. He voted to not exclude child benefit from the benefits cap, to penalise people with a spare room with the bedroom tax, against a fax on bank bonuses to create more jobs and against supporting small businesses that employ people.

On the Presidents Club Dinner scandal, The Daily Mail gets stuck in. The Guardian report on 15th February that calls had been made for Nadhim to step down for not reporting what went on. He issued a report after an article appeared in the FT, not after the event took place the week before.

He attacks Asma Al Assad in the Guardian in an opinion column for being married to Assad, which seems misogynistic as if he thinks Assad is wrong, why not just attack him directly? This article has now become impossible to find………..Many unsuccessful searches later, here it is. Is Asma blocking Nadhim’s self-interest to take oil from Syria, in the way the King of Botswana who became its first president blocked the UK secret mission to mine for diamonds on his tribal land in the 1940s?

Notice that the address registered in Bermuda is not mentioned here. although it is on all company information on their website http://www.gulfkeystone.com/about-us/offices-and-contacts

He earned a heck of a lot of money from Gulf Keystone Petroleum, with a huge pay out when he resigned recently to take his ministerial post, when Gulf Keystone was massively in debt and facing insolvency. How did he make so much money here? Even the Daily Mail want to know.

Now, on Thisismoney, Gulf Keystone Petroleum is recommended as a top buy with its share price going up. What is going on? I will never understand how a company so in debt that it cannot pay its debts can attract investors? This document from Companies House might give some clues. This is happening now while we’re dropping bombs on Syria. In 2016, shares in Gulf Keystone plunged by 30% and the Kurdish government didn’t repay £100million that it owed Gulf Keystone, which was also effected by falling oil prices (remember a couple of years when petrol got cheaper? Now it’s going up quite fast. Is there a link?).

Nadhim has an amazing voting record. Have a look for yourself at how he votes on human rights, and on welfare and benefits, and he voted against investigations into the Iraq War, while most other Tory MPs voted for investigations. I wonder why?

Along with Stephen Shakespeare, Nadhim was a co-founder of YouGov that gives many MPs payouts for answering a few loaded questions to gain press inches, especially to undermine public confidence in the Labour Party in the run up to the election. (See my full blog on this here) he has quite a property portfolio.

In 2013, despite this being after the expenses scandal, he claimed over £5000 for utilities for his country mansion that turned out to be electricity for his stables. Lessons unlearned.

Anyway, Nadhim Zahawi quit the oil firm in January this year and it looks as if he has quite the family firm he set up with his wife and his recruitment firm SThree too, a promise he made if he became a minister. 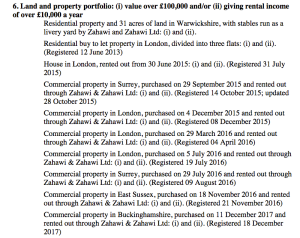 This guy defintely benefits financially from his various financial interests and his position as an MP. He is doing nothing illegally, which illustrates how a Conservative MP can get away with behaviours which don’t seem fitting for a government representative, can profit from government expenses, such as claiming for a large electricity bill for his stables, now paid back, and as an MP since 2010, the taxpayer has helped him increase his property portfolio through allowances and expenses, which he can now rent out. As a parliamentarian he receives private donations, though the purpose of these does not have to be explained in the Register of Ministers Interests. (dated 18 April 2018). Zahawi is easy to find at the very end of this document.

There is the offshore, with Gulf Keystone was incorporated in Bermuda in 2001. With Zahawi’s vote against investigation into the Iraq War (although most other Tory MPs voted for it), his salary of £30,000 a month while lower-income investors’ shares were wiped out when the price plummeted by 99% to 2pm in 2016. With involvement in war and public attacks on Assad and his wife Asma, it makes me wonder if they somehow got in the way of Nadhim Zahawi’s interests. I just wonder if oil, gas, pipelines and Syria come into it somehow.

This is an interesting little piece about the Assads, Syria, oil, pipelines and share prices.

My main questions are:

On 9 Mar 2011: Nadhim Zahawi voted to introduce Universal Credit and Personal Independence Payments and to restrict housing benefit for those in social housing deemed to have excess bedrooms. [Here is the link]

Nadhim Zahawi has financial ties to Balshore Investments and Berkford Investments, which operate from a lawyers’ office in Gibraltar. He does not declare a connection to either company on the MPs’ register of interests.

I wonder how private donations work. Particularly from Peter Cruddas.

So who are the people who have made private donations, listed in Zahawi’s register of interests:

Why is Peter Cruddas making private donations to Nadhim Zahawi in 2018? According to Wickipedia:

This Guardian article concludes that “Last year Balshore received around £112,000 in dividends from YouGov. The current tax on dividends for higher rate taxpayers in the UK is 32.5%. There is also no liability to tax on dividends paid by a Gibraltar company to a person who is not resident in Gibraltar.”

I just don’t feel comfortable with our country being run by people with such duplicitous, self-serving double standards as Nadhim Zahawi.