As now we have reached one hundred years after women first won the right to vote in the United Kingdom, I think it is worth reflecting on how Great Britain recovered from two world wars to see what could happen today to help us get back on our feet.

Whatever problems we face in our economy today, we have previously recovered from comparable or, probably, worse deficits at the end of World War 2. Austerity today seems to be only applied to public services, government subsidies and funding and not a belt-tightening for the whole country, with a requirement for equal input from everyone.

I had a hunch that the austerity imposed by the Conservative Government did not reach across to tax rises for the rich to reduce our deficit and TV documentary exposures by George Lamb Generation Screwed and Jacques Peretti of off shore investments and tax break Britain have backed up those suspicions. Luxury imports cannot keep swallowing money from the British economy while the other half (or 99%) are going hungry. At least, think of the children. 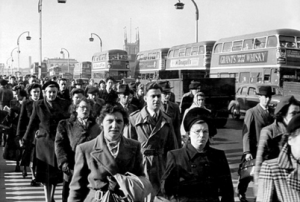 Click on this picture for a blog about Britain’s recovery after World War 2.

The big disasters of recent times have been mainly financial. I don’t believe unrest happens for no reason and in his book “Done – The Secret Deals that are Changing Our World“, Jaques Peretti shows how men in glass offices in Wall Street started speculating on the very wheat that people in North Africa relied on to survive, which resulted in exorbitant price rises, starving people and putting them out of business.

In 1945, Britain had a change of government. Labour were voted in with Clement Atlee as the Prime Minister to help us emerge from the rubble of our burnt and bombed out towns and get back on our feet. Rationing continued until 1945 and on 15 July 1946 we borrowed money from the USA and Canada, which was finally paid off in 2006.

This piece focuses on how, after WWII “the people of Europe and Britain were saved because governments accepted the moral responsibility for all people, allies and ex-enemies alike.” Something ‘Neo-liberals’ do not consider.

World War 2 had followed the Great War by 21 years and the government at the end of the First World War had reneged on war pensions whenever it could find a way to do so. By contrast, after World War 2, Atlee’s government built 400,000 new homes, grammar education, free meals, orange juice and milk for children and improved the welfare benefit structure.

During Clement Atlee’s time as Prime Minister (Atlee with other Labour MPs had been in parliament during the coalition under Churchill during the war) the NHS was started, liberating women from unregulated employment in domestic service – or being lampooned by people moving to the suburbs who were too proud to open their own front door, when women protested and drew dole rather than be exploited in people’s homes – by paying them to train as nurses.

The History of British Rail

After employment hit a peak in the 1930s, Labour started to nationalise industries to be run by public companies, including the Bank of England and, in 1969, British Telecom, The nationalisation of the British Rail aimed to get the rail network back up and running after the ravages of the war, create employment and make rail cheaper than travel by car, therefore reducing pollution from the roads and helping people move about more for work.

Problems with nationalisation was mainly the lack of accountability of the people running these organisations, known as ‘moral hazard’ where they do not see the consequences of their inefficient actions if the tax payer is going to bail them out with government subsidies (otherwise needed by education or health, for example).

How the banks owed compared to other bailouts

However, this did not stop Lloyds Bank being nationalised in 2009. It is interesting how this BBC Bitesize blog focuses on the weaknesses, rather than the strengths of Labour’s nationalisation program (future governments can learn from past mistakes if they choose to) and this leads to a read of the BBC Board’s press release about how its members are appointed.

We can still learn from the past and do things better this time around. Unemployment was reduced to below 3% under Clement Atlee’s Labour Government with the nationalisation program, which, along with the NHS, the Conservative government (fewer votes but more seats) of 1951 kept going. At this point, it is worth a look at Parliament statistics.  There was also a broken election promise by Churchill to allow Seretse Khama back to his wife and family to rule Botswana and turn it into a successful democracy, which stole a narrow victory for the Tories. before Churchill announced a lifelong exile for Khama.

Today, with the gig economy, zero hours contracts and greatly reduced workers’ rights, we have exploitative employers and lowering wages despite the rise in living costs. The Conservative Government are being irresponsible about this by simply claiming the lowest unemployment figures in 40 years since (guess what?) a Labour Government. When you look at this claim against the rises in homelessness (1000% since 2010), reliance on food banks and deaths linked to welfare sanctions and work capability assessments, you can see the picture today is not pretty.

David Cameron has cut two holidays to Cornwall short due to mobile signal blackouts in Polzeath.

Therefore, if we have repaid our loans before, we can do so again: We could renationalise rail, telephone (Fibre Optic WiFi) companies with firm external regulation and any other British industries left after this idea of the “trickle down economy” ravaged the public purse by allowing tax breaks to companies in the United Kingdom ravaged our industry sector. In Germany, industry, employment and exports have remained mostly strong, with part-time workers and the unskilled labour market more reliant on income than welfare. Instead of previously not altogether successful “People before Profit” perhaps, unlike now where “People” are lost coughing and wheezing in the dust behind racing “Profit”, we need People beside Profit, hand in hand and accountable to each other. Our diverging economy is not good for the country as a whole, as this OECD article describes. 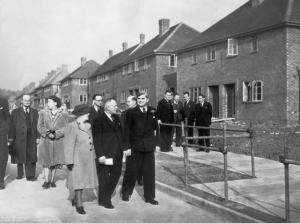 March 1949: Aneurin Bevan opens the 500th permanent house built in Elstree since the end of WW2

This Economist article outlines the strengths and weaknesses occurring in Germany and is also one of the first real time and comprehensible effects of the deliberately inaccessible Maastricht Treaty of 1991, that ruled for borrowing to be kept below 3%, which Germany ignored to its advantage. I love articles like this that dissect ingredients and think the British Government ought to start thinking like that for solutions for the future.

It is worth examining this Wikipedia entry on austerity, which it describes as:

It is a deficit reduction programme consisting of sustained reductions in public spending and tax rises, intended to reduce the government budget deficit and the role of the welfare state in the United Kingdom.

It is known that today this has become one-sided, with the cuts to public spending on the increase, while the tax rises are not reaching everyone. Frankly: austerity was a measure to reduce the country’s deficit by spending cuts and tax rises, whereas the phase we have faced under the Conservative government has been about funding cuts and reducing spend on public sector wages and NOT on corporation or income tax or on the failures of the financial sector that are responsible for the crash.

An article on Vice shedding light on council housing.

Anyone living since 1945 has benefited from a Labour government in terms of housing, education, welfare, jobs, transport and healthcare. At the same time it is worth recognising how current governments have eroded the opposition from within their ranks.

Since 1979, society has been squeezing out the educated, previously wealthy but not extravagant professional classes, leaving us with a socially irresponsible class of unscrupulous and untouchable wealthy people who ignore behaviour protocols and have no connection to their communities and the herd of bigoted, prejudiced and anti-social people who follow in their wake.

While America may be planning to nationalise the 5G phone network for suspect reasons, Owen Jones points out in the Guardian that the mobile phone networks operating today owe their successes to public sector funding, particularly early work on fibre optics that were put on hold under privatisation.

The only thing that “trickles down” from the elite is behaviour and certainly not wealth.