It’s cheaper. It’s better. It has a longer shelf life as it has spent less time travelling from where it was grown. Buying it sends a clear message to supermarkets that we will not be tricked. This is about buying local produce from independent shops and market vendors.

The idea for this blog came from two plants of the same species on my windowsill. One cost £3 and came from a shop and the other was bought alongside my vegetables from a market stall for £4.

I purchased both plants in November 2016 and have even put the one on the left in a bigger pot as the original pot was a thimble.

I set out to argue for more street markets in every town so shoppers can buy direct from producers. This is of course why farmers’ markets came about. Although people associated farmers’ markets with expensive produce, not suited to everyone’s requirements, schedules and means of transport, buying local produce means spending less for similar items in supermarkets.

Therefore, the aim of this blog is to show how, not only would you be getting better quality, fresher and a wider variety of produce when you buy locally, but you are also making great savings on your shop when buying real, not junk, food.

The knock on effect is of course that this would help local producers maintain their farms and spread out their production costs. This in turn would force supermarkets to reduce their prices again.

The new breed of greengrocers were priced for a richer consumer than before supermarkets dropped than raised their prices to get more people into their stores.

Until 2003, there was a long-standing local fruit and veg shop near where I lived. I could fill a large plastic bag for around £5. Then we had an exceptionally hot year and the local shop had to install refrigerated areas for the first time. Profiteering supermarkets at around this time priced their fruit and vegetables very aggressively to suck in customers until the independent shops disappeared from the high street.

Once the local competition had been wiped out, supermarkets started to raise the price of fresh produce. The sharply increased supermarket prices did then allow local producers to return to the high street, but by now many people were using supermarkets for convenience, flexible hours and only wealthier people with more flexible schedules were drifting back to independent greengrocers.

This array of produce costs less when bought directly from the market and has a wider selection, including Yarg cheese from the producers

So here we are. Supermarkets are using every means possible to get us to part with our cash. You are familiar with loyalty cards, vouchers that expire within a week, BOGOFs, eye-level brand product placement and sale-like signs for non-sale items. This article provides ideas on how to get the most from your supermarket shop.

Although the new breed of greengrocers and farmers’ markets does not appeal to the mobility, schedule and budget of every customer, they are cheaper today than supermarkets. See this article on Kentlive’s website written on 19 June 2014, where a direct comparison has been made between the supermarket and local shop prices for key items.

Meanwhile, supermarkets are hoping we don’t notice while they take more money from us. I went to Sainsbury’s to earn Nectar points from a voucher recently and was shocked that I now get half a Nectar point for every pound I spend. On 12 April 2015, Lisa Bachelor Harriet Meyer reported in the Guardian that Sainsbury’s halved Nectar points earned from 2 per pound spent in store to just one on 11 April 2015. Morrisons have done the same on the quiet. This means that you need 500 nectar points to redeem the minimum value allowed of £2.50.

Sainsbury’s even promised a 10x Nectar point boost for this bank holiday weekend and I saw on my bill that I had earned 387 bonus points spending £33.83. This article by Jordan Cox, published on 28 April 2017 reveals the truth behind this promotion, with the price increases that coincided with the Bank Holiday weekend point boost. 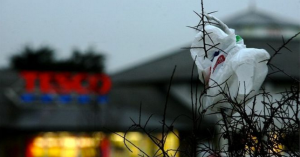 Supermarkets use the emotional article about what plastic does, when not disposed of properly to profit from their sale without rewarding customers for responsible use.

Let’s not even get started on plastic bags. On 5 October 2015, a new 5p charge was levied on new single use plastic bags. This seems to not coincide with any recognition of previous trends and it also means that supermarkets have stopped giving customers a point for every bag of their own they have used. Before 5 October you were asked how many of your own bags you have used and received one loyalty point as a reward.

Since the change, the same number pad appears and asks you how many new bags you have used and adds 5p per bag to your bill. The same timing and appearance of this keypad must surely have led customers to be charged 5p per bag of their own they had brought (from personal experience) and given them no loyalty points. The Daily Mail aim to sum up customers’ responses to this.

Perran-a-worthal Fruit and Veg shop have a large variety of local produce including fruit, veg, meat, cheese and bread.

Therefore, supermarkets are focused on profits while pretending to be green. Not only do single use plastic bags have a longstanding low carbon footprint as they end up as bin bags at the end of their life (reducing circulation on bin liners, which immediately appeared near the impulse purchases in some supermarkets as sales of these increased with the PlasTax) but customers are no longer given an incentive to use their own bags.

The press has reported on these issues, but shouldn’t the government govern this more strictly? Why would they when the Conservatives have sold the Green Investment Bank – which dealt with funding for green initiatives in the UK – to a large profit-driven Australian energy company Macquarie.

In conclusion, this leaves those of us with the means and time to take our food custom away from the large supermarkets and put it back firmly into our local shops and markets, buying as much as we can directly from local producers.

Buying locally from markets and independent shops has been shown to mean:

Of course supermarkets will try and jump on this band wagon as soon as it hits their profit margins. We need to keep an eye on them to protect our local food producers and local economy as a Tory government certainly will not.

My life after Alcoholics Anonymous