In light of George 3 Jobs Osborne, while researching for other Tory poopery, I found an interesting blog on a conservative website which makes an interesting point. In summary, James Frayne (the author) concludes that:
“…outside business is surely a distraction from the job they are supposed to be doing to the best of their ability and which MPs claim is all-consuming.”

Frayn says: “I’m personally sympathetic to the argument that Parliaments should be short and do little; but in reality, nothing could be further from the truth – there’s an endless amount to discuss as a direct result of what politicians do and plan. In short, if politicians are going to create such an interventionist state, they need to be on hand to manage it and regulate it on a full-time basis.”

MPs currently hold down a range of other jobs, from media, to law, a GP, a dentist and some farmers. However they all believe these occupations enrich their work as an MP and do not detract from their political contribution. MPs declare their TV appearances as a pundit in their registration of MPs interests. 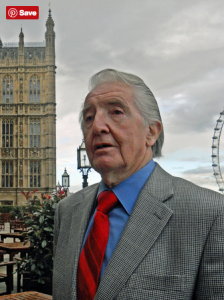 Dennis Skinner – had a real job before entering politics

Personally, I would be more interested to know what jobs were held by MPs before they entered politics as this would surely give them the biggest insight into the realities of civilian life, earning a living, wages, private sector pressures and working conditions and the obstacles to landing a job in the first place, particularly as a recent graduate with little experience.

It’s widely reported across the media, such as in this Express article, that there are now 90 career politicians in parliament rather than 20 MPs with little experience outside politics in the commons in 1979. A point that was raised was that perhaps politicians would be less trigger happy to take on a war if more had actually served in the armed forces and knew the realities.
This Independent article may amuse you, even if you are not surprised that Dennis Skinner worked in one of the most down to earth jobs before politics: as a coal miner.
The big question about MPs jobs outside politics comes down to trust. We would surely trust those we pay to represent us in parliament if we knew they were fulfilling their roles and doing their best to reflect the nations best interests.
One little gravy train for MPs, I have just noticed in the Register of Ministers’ Interests is, seemingly, being paid to enter opinion polls for YouGov, ComRes, Ipsos MORI and other opinion poll companies.
This is the subject of investigation for my next blog. What do opinion polls do, why are a few MPs being paid to do so many? Which polls are these and do they declare that MPs were polled and can people paying for polls to generate vacuous news to hold up their political intentions so money doesn’t influence votes?